Japan’s Shinkansen “bullet train” network is the world’s oldest and most used high-speed railway in the world. The map above charts its growth from 1964 until the present day and beyond.

The Tōkaidō Shinkansen between Tokyo and Osaka was the first line to open in 1964, just in time for the Tokyo Olympics.

That year, there were just 11 million journeys on the network. Yet, over the course of the next 50 years, 11 billion journeys have been made on Shinkansen trains, making it the most used system in the world by cumulative journeys.

Current annual ridership, on the other hand, is relatively stagnant at a little over 300 million journeys, making it the second most used network on an annual basis. First place China recoded over 440 million journeys in 2013 and this number is increasing rapidly.

They 6 main lines in order of opening are:

Future lines in order of expected opening date are:

And if the growth and expansion of the network were not impressive enough, Japan has cancelled and/or shelved more plans than the UK is ever likely to build.

Some of these cancelled lines include:

Want to get a better look at how the Shinkansen network looks today? Well here’s the map for you: 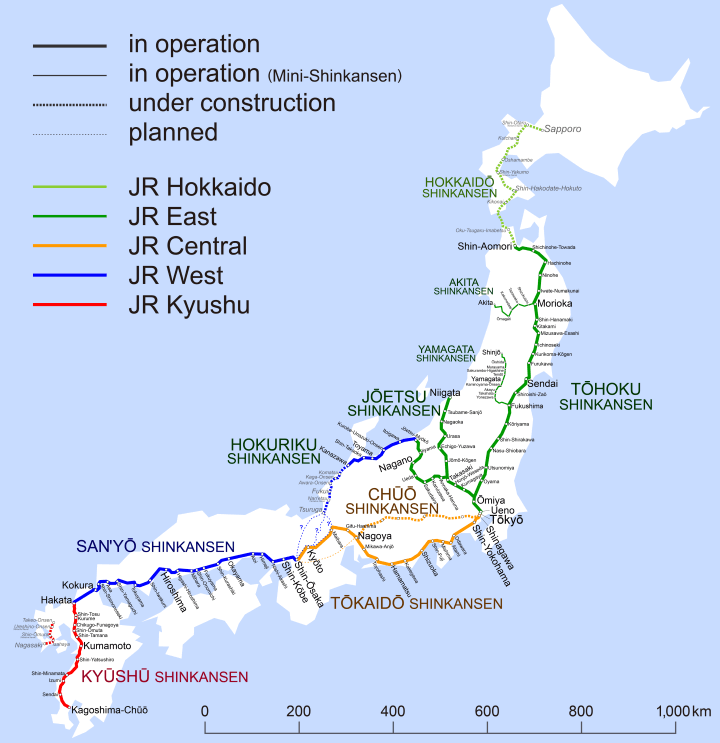 Map created by Hisagi via Wikimedia

Enjoy this post? Please help us by sharing it: